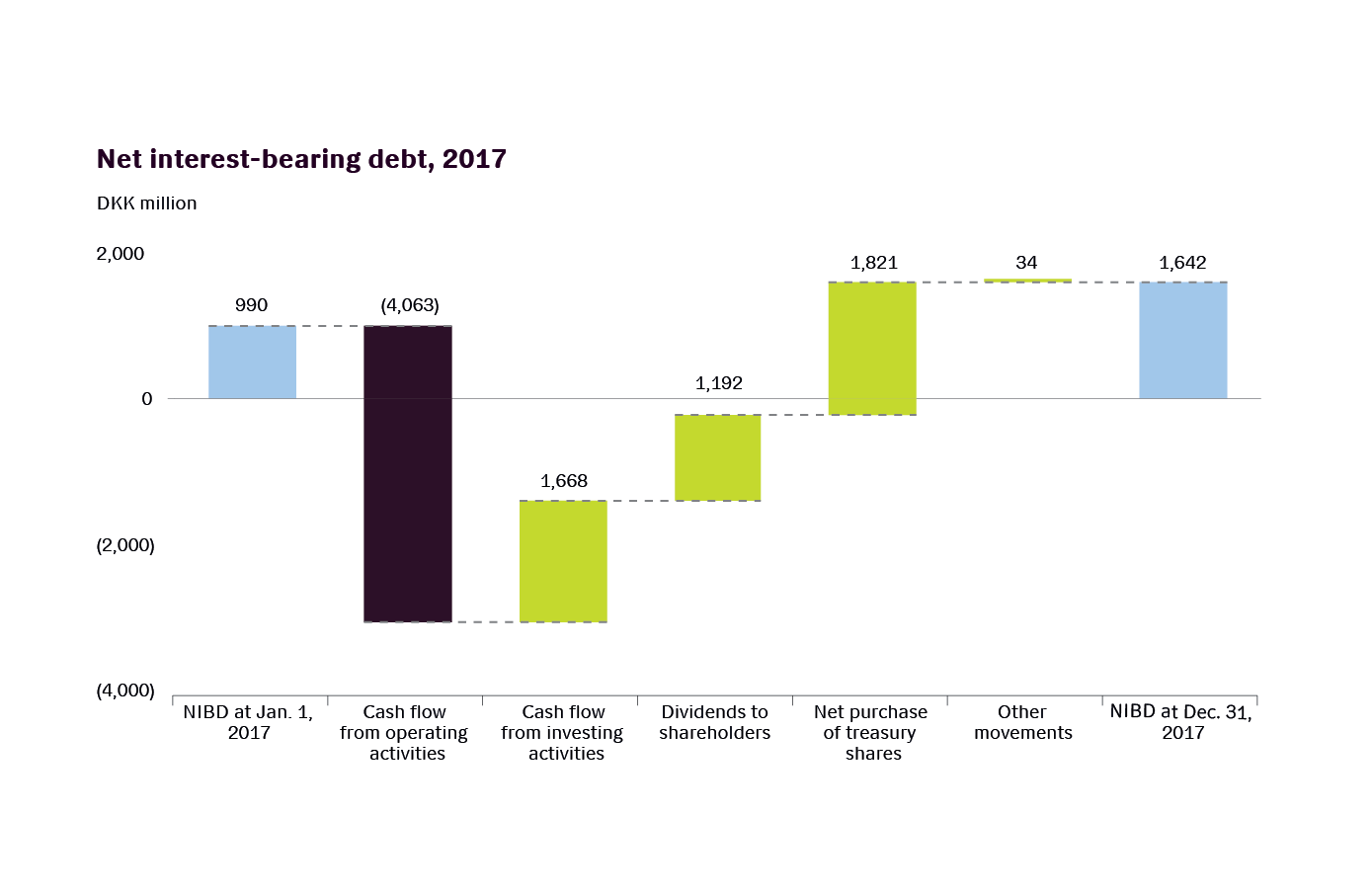 Novozymes’ international operations mean that our earnings and financial position are exposed to a number of financial risk factors. Financial risks are managed centrally for the entire Group. The Treasury policy is approved by the Board of Directors, and sets the limits for the various financial risks and the derivatives used to hedge the risks. The Treasury Policy is adjusted on an ongoing basis to adapt to the market situation, and contains rules on which derivatives can be used for hedging, which counterparties can be used and the risk profile that is to be applied.

Currency risk arises due to imbalances between income and costs in each individual currency and because Novozymes has more assets than liabilities in foreign currencies in connection with global operations.

Hedging of currency risk is carried out in the currencies where Novozymes has the largest exposure. The hedging is managed by entering into derivatives such as forward contracts, currency options and swaps. Loans and deposits in foreign currencies are also utilized as hedging. Hedge effectiveness is assessed on a regular basis.

Currency risk related to net investments in foreign subsidiaries is hedged where this is deemed appropriate by taking out loans and entering into swaps. Currently, there are no open transactions used to hedge equity investments.

The sensitivity analysis reflects the transaction and translation risk, and assumes that the exchange rates are changed on December 31, 2017, and that all other variables remain constant. The table below shows the effect of an increase in exchange rates. A decrease in the exchange rate would have an opposite effect.

Interest rate risk arises in relation to interest-bearing assets and liabilities. In accordance with Novozymes’ Treasury Policy, a minimum of 30% of loans must be at fixed interest rates. Hedging of the interest risk is managed by entering into fixed-rate loans and interest rate swaps.

Credit risk arises especially on cash and cash equivalents, derivatives and trade receivables. The credit risk on trade receivables is countered by thorough, regular analyses based on customer type, country and specific conditions. The credit risk on cash and cash equivalents as well as derivatives is mitigated by the Treasury Policy, which limits exposure solely to counterparties that have an investment-grade credit rating. The credit risk is calculated on the basis of net market values and is governed by the Treasury Policy. Novozymes has entered into netting agreements (ISDA or similar) with all the banks used for trading in financial instruments, which means that Novozymes’ credit risk is limited to net assets.

In connection with the Group’s ongoing financing of operations, including refinancing, efforts are made to ensure adequate and flexible liquidity. This is guaranteed by using committed credit facilities and placing free funds in deposits, government bonds or ultra-liquid mortgage bonds in accordance with the Treasury Policy.

With the exception of debt to credit institutions, the maturity dates are primarily within one year.

In 2017, the financial asset related to the partnership with Beta Renewables S.p.A. has been fully written down. This relates to a guarantee provided by M&G in 2015, because 2G projects have not commercialized as expected in Beta Renewables S.p.A. The write-down is a consequence of M&G experiencing financial difficulties. This has resulted in a write-down of DKK 120 million, which is included in Financial costs.

Financial income and Financial costs also include fair value adjustments of derivatives used to hedge assets and liabilities, and income and costs relating to cash flow hedges that are transferred from Other comprehensive income on realization of the hedged item.

The table below shows the derivatives the Group has contracted to hedge currency exposure on financial assets and liabilities that give rise to currency adjustments in the income statement.

The table below shows the derivatives that the Group has contracted to hedge currency and interest rate exposure in future cash flows.

Hedge accounting consists of positive and negative fair values of derivatives, which are recognized in the balance sheet under Other financial assets and Other financial liabilities respectively.

Derivatives used for fair value hedges are measured at fair value on the reporting date, and value adjustments are recognized as Financial income or Financial costs.

Derivatives used for cash flow hedges and hedges of net investments in subsidiaries are measured at fair value on the reporting date, and value adjustments are recognized in Other comprehensive income.

Income and costs relating to cash flow hedges and hedges of net investments in subsidiaries are transferred from Other comprehensive income on realization of the hedged item and are recognized as Financial income or Financial costs.

Derivatives are recognized at the transaction date.

Each year the Board of Directors assesses whether the ownership structure with A and B common stock is optimal. The Board of Directors maintains that this is the best way to safeguard Novozymes’ long-term development to the benefit of the company’s shareholders and other stakeholders.

The treasury stock is used to reduce the common stock, and to hedge employees’ exercise of granted stock awards and stock options.

5.6 Financial assets and liabilities by category

The table below shows the Group's financial assets and financial liabilities at December 31 by category.

All financial assets and liabilities, except for derivatives, are measured at cost and amortized cost. The carrying amounts for these approximate fair value. Derivatives are measured at fair value based on observable data (level 2 input) according to the fair value hierarchy. The derivatives are not traded on an active market based on quoted prices, but are individual contracts. The fair value of these assets is determined using valuation techniques that utilize market-based data such as exchange rates, interest rates, credit risk and volatilities. There are no financial instruments measured at fair value on the basis of quoted prices (level 1 input) or non-observable data (level 3 input).