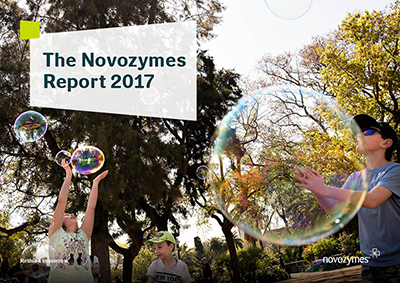 Return on invested capital (ROIC) Adjusted operating profit (NOPAT) after tax as a percentage of average invested capital. EBIT is adjusted for net foreign exchange gains/ losses and share of result in associates., including goodwill, was 25.6%, up 0.5 percentage points from 25.1% in 2016. The increase was mainly a result of a higher EBIT Earnings before interest and tax. See operating profit. and a lower tax rate, partly offset by higher net investments.

Invested capital increased from DKK 12,584 million in 2016 to DKK 12,880 million in 2017. This was mainly a result of high net investments, partly offset by the impact of changes in currency.

Novozymes’ net working capitalAll current assets less current liabilities used in, or necessary for, the company’s operations. The main components are inventories, trade receivables and trade payables. decreased to DKK 2,023 million, down from DKK 2,088 million in 2016, mainly due to an increase in trade payables and a decrease in trade receivables, which has been partly offset by release of deferred income.